Egg. World. What am I supposed to write down here today? If the comic doesn’t want to speak for itself, it probably just wants to hide behind the gray you eating mountain and read a book in the relative safety of fictional shadows. Also, I am suspicious of everything that even might possibly look like a bird, especially birds. Just saying. In other news, as of today my new personal five club juggling record is 29 catches. So, thanks for reading today’s comic, but now you should put down your super-powered comic viewing solar celled binoculars and go practice your juggling, or maybe, I don’t know, paint a painting of the universe? But also, don’t leave your  super-powered comic viewing solar celled binoculars on the ground like that. Somebody could trip over them and that would be something that could have been avoided? Sure, I’ll end with that. Goodbye, goodnight, good birds.

Silly Human, we aren’t claiming to know your destiny. We’re just singing the fish song. Also, would you mind having a word with Billy about his singing. He’s always off key and about seven to eight verses behind.

I purchased the magical rug from a small shop that was only there on that one day. Appearing between two shops usually found alongside each other. The old man who ran the shop really liked to talk. He spoke for many hours about his grand adventures, his opinions on the moon and the stars, the names of all his children, grandchildren, neighbors, and also that I would never want to walk again. I thought that maybe he was trying to warn me about a curse, but I wasn’t too concerned. After all, what is a curse compared to a genuine magic carpet? Past me just did not understand. I get it now. I really do. He wasn’t talking about a curse, or anything strange or magical, just the pure joy of flying through the sky on a magic carpet. 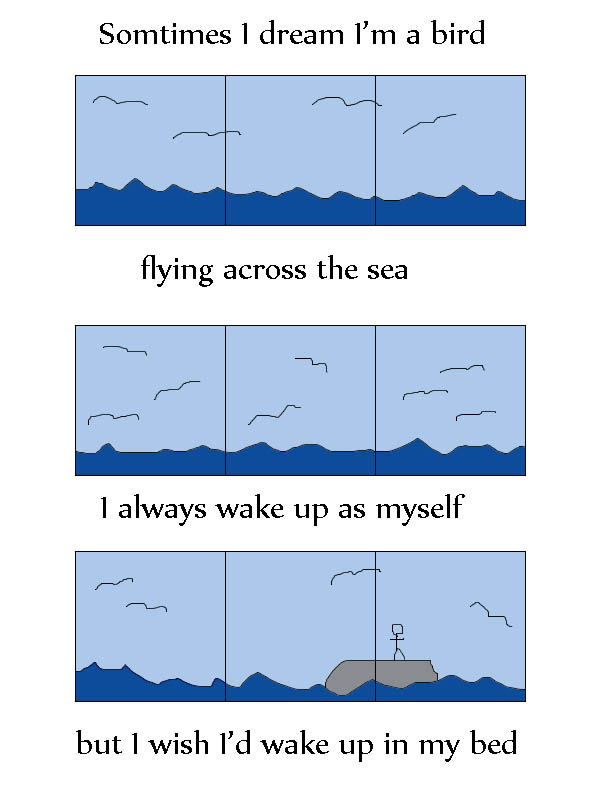 I mean, like seriously? How am I  to know if I got up on the wrong side of bed when I wake up on a pile of rocks? At least my pajamas aren’t too embarrassing.